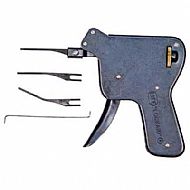 Manual Lock Pick Guns Lock Pick guns also known as EZ snap guns or lockaid tools are locksmith tools that are generally misunderstood by the uninformed. Pick guns are for use in opening pin tumbler locks, Period. Pick guns or lock aids or snap guns as they are commonly called operate on the laws of physics - Action verses reaction. Rather than opening locks by the traditional raking techniques with standard lockpicks, a snap gun uses a primary law of physics, the transfer of energy, to compromise locks. Manual pick guns have a slim "finger" (also called a needle or pick blade) that is inserted into a keyway. You squeeze the "trigger" which cocks the mechanism and lets the needle drop. When the trigger is further pulled, an internal hammer is released which causes the needle to snap upward or downward depending on which gun you have. There is a thumbwheel on the pick gun that determines how hard it snaps. Adjusting the thumbwheel just right takes a bit of getting used to. Before the hammer falls, the needle should be lightly resting on all of the bottom or top pins. You should have a tension wrench in place, in the keyway as in regular lock picking. The torque (or tension) should be very, very light. When the needle snaps  the  pins will be thrown all at the same time, away from the bottom or top pins. For a brief moment, while the top pins are thrown upward, the shear line between the plug and the shell is unimpeded, and if the proper amount of light pressure (torque) is present on the tension wrench, the plug will turn and the lock will open.You can get the guns for euro locks which fire down and nightlatches which fire the pins upward , Some locksmiths prefer to use a circular tension wrench over the more common flex tension wrench, were the needle of the gun goes through the middle of the wheel and into the lock.

Here at locksmith training merseyside we like these guns, with a bit of practise these guns can open a lot of locks easily.

The manual lock pick gun was developed decades ago to allow police officers who were not skilled in the art of lock picking to open locks with very little instruction. The manual lock pick gun is a great tool for locksmiths, if you think about it, the batterys will never run out on it. Keep in mind that having and using a lock pick gun is a great addition to the locksmiths' toolbox but it is not a substitution to a complete lockpick tool set. Pick guns are limited in their abilities and, as stated earlier are great for simple pin tumbler locks.

we here at locksmith training merseyside train our trainees in the use of the manual pickgun as part of the course. 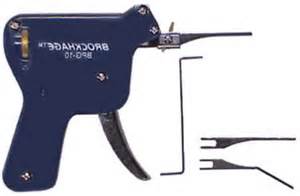