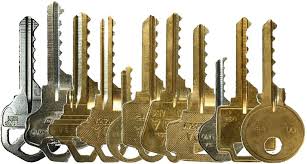 We handle keys daily – keys to the house, a suitcase or briefcase, the garage, the car, work, our computers, and more. And we rarely stop to consider what a complex thing a key is. What is a key, really?

According to the American Heritage dictionary, a key is: “A notched and grooved, usually metal implement that is turned to open or close a lock.”

The Oxford English Dictionary says: “An instrument, usually of iron, for moving the bolt or bolts of a lock forwards or backwards, and so locking or unlocking what is fastened by it; usually fitted on the bit or web with more or less elaborate incisions, etc., adapted to the wards of the lock.

In this context, web is a synonym for the key bit.

The Encyclopedia Britannica 2004 says more simply: “a usually metal instrument by which the bolt of a lock is turned; any of various devices having the form or function of such a key.”

My definition of a key

A key is an instrument that is programmed or coded through the shape of the bit, which matches the pins and wards of the locks.

A key is a complex blend of technology, mechanics, form, and choice of materials for the primary task of moving a lock bolt to its open or closed position, usually by turning – transferring the torsion of the key bit to the bolt in the lock housing.

Each key is shaped for a specific lock in a specific historic era, which also determined its style.

The key concept can also be symbolic.

About the word key

The word key occurs in many contexts that are not directly related to the phenomenon of locks and keys. For example, keyboard, keynote, keyword, keystone, turnkey, key player, musical key.

The modern word key evolved from the Old English cæg. Its roots are unknown and the only cognate is the Old Frisian kei. The figurative meaning, “serving to open or explain,” existed even in the Old English.

Some other words for keys in other language families are:
Swedish – nyckel; Finnish – avain; Russian – klyuk; German – Schlüssel; French – clé.

A key is a symbol of all forces that open and close, bind and release. It stands for liberation and incarceration. A key is always tied to the concept of locking or unlocking.

The Prado museum in Madrid has a four-meter long painting made by Diego Velázquez in 1634–35, “The Surrender of Breda (1625).” The painting depicts the Dutch governor of Breda, Justin de Nassau, humbly handing over the key to the city to Spanish general Ambrosio de Spinola.

The Bayeux tapestry contains a scene from the middle of the 11th century, in which Duke Conan, locked in the tower of the city of Dina, resignedly hands over the keys to the city to the commander of the attacking Normans, Duke William the Conqueror. Just in case, Conan holds the keys on the sharpened tip of his lance. William seems to be accepting his surrender as he takes the keys on his own lance.

Many cities have considered themselves “key cities,” which they have indicated with one or more keys in their city coat of arms. One such key city is Gibraltar, the key to the Mediterranean, whose coat of arms depicts a fortress with three towers and a key.

Another symbol of power is Swedish King Erik XIV’s Key to the Kingdom, which is a part of the Swedish royal regalia.

Saint Peter, the guardian of the Gates of Heaven, is represented as carrying one or two keys. Since the 13th century, his successors to the Holy See – the popes – have had a coat of arms with two crossed keys, one silver and one gold..

In the 18th and 19th centuries, a chamberlain’s key symbolized the high position of a chamberlain in a royal court or with the nobility.